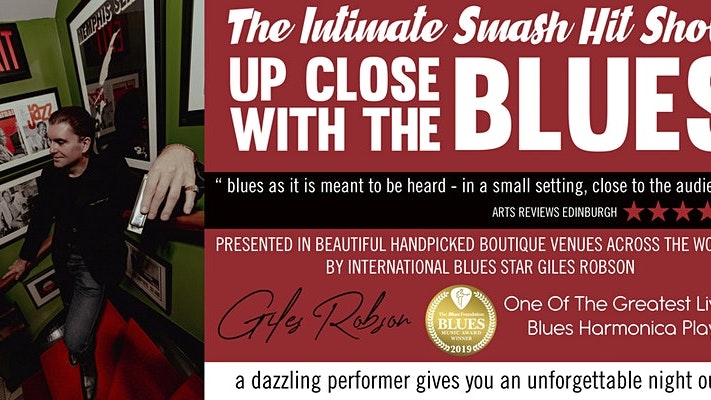 LIMITED TO ONLY 50 AUDIENCE MEMBERS it will be presented in the wonderfully atmospheric & intimate live music room at Annabel’s Cabaret & Discotheque, 88 Vauxhall St, Plymouth PL4 0EY

The RAVED ABOUT 5 Star SMASH HIT show “Up Close With The Blues” is land in Plymouth at the wonderfully atmospheric Annabel’s Cabaret & Discotheque and will feature a USA musical legend! Very special guest Bruce Katz, a Blues music Award Winner, is one of the world’s GREATEST virtuosos of the piano and B3 Organ. The keyboard artist of choice for the Allman Brothers Band members Gregg Allman and Butch Trucks, blues legends Delbert McClinton and John Hammond Jr and many, many more. He will join forces with the UK’s own Giles Robson to present a rare and intimate “Up Close With The Blues” show for Plymouth music fans

Find out more about Bruce’s incredible career from his Wikipedia page: https://en.wikipedia.org/wiki/…

The show “Up Close With The Blues” tours globally, performed in beautifully intimate venues handpicked by the show’s star, the internationally acclaimed blues master Giles Robson. The venues are chosen for an atmosphere and feeling that enhances the beauty, emotion and humour of the blues.

Arts Reviews Edinburgh describe the experience of the “Up Close With The Blues” show PERFECTLY IN THIS AMAZING REVIEW…….

“Blues music as it is meant to be heard – in a small setting, close to the audience, not on a huge stage where the audience are small shapes on some distant horizon. The blues is full of warmth and humour, and it is this same personal warmth and humour that Giles Robson so effortlessly brings to stage with him to put his audience at ease and connect with them immediately. A virtuoso display of just what a range and depth of music and emotion the blues-harmonica is capable of in the right hands. Giles also is a fine blues vocalist, and for me it is always the human voice that is ultimately the defining sound of The Blues.” *****5 stars Arts Reviews Edinburgh

Multi award winning, internationally recognised Blues harmonica virtuoso, singer and masterful showman Giles Robson has had what can only be described as a dream musical career. The ONLY UK or European artist to appear on Chicago’s legendary Alligator Records who described him as “A blues giant, absolute master of the form”. He is only one of THREE UK blues artists alongside Eric Clapton and Peter Green to win a coveted Blues Music Award in Memphis (The Grammys of the Blues). His albums are in the top of the world’s most prestigious music magazines critics polls – Mojo Magazine, Living Blues and Downbeat. He regularly tours 15 countries internationally a year.He plays and sings beautiful, powerful, emotional and timeless blues with a deep groove and laden with intense feeling. He is widely considered one of the world’s greatest blues harmonica virtuosos. He plays in his own accomplished and distinct style that captures stunned audience’s hearts and imaginations with his mixture of superb technique, rhythmic power, tonal control and sensitive emotional expressiveness. Witnessing Giles Robson live is a dazzling, and unforgettable experience as audiences from around the world constantly discover.

“Giles Robson belongs to the finest, the absolute top, of the current blues generation” Rootsville.eu (Belgium)

Find out more about Giles, read his blog and subscribe at: www.gilerobson.com